One of Atlanta’s largest and oldest synagogues had experienced five years of declining membership, decreasing participation in services and other activities, and related financial difficulties. Although a strategic plan had been developed in the past, it was never implemented.  This planning process was different, the plan has been implemented, and the synagogue has revitalized.

Working with its leaders we developed and implemented a synagogue strategic planning approach that involved the entire congregation.  All members were invited to communicate their needs and engage in developing innovative approaches to revitalization. The participants were so enthusiastic that positive changes began even before the plan was officially adopted. After the first year of implementation, membership increased, programming expanded, and the religious school was revitalized.  Participation significantly increased across all areas of synagogue life, finances improved, and there was broader participation in governance. This planning process and the resulting plan won the Conservative movement’s Solomon Schechter award in 2009.

Eight years after completing its planning process this synagogue continues to thrive. 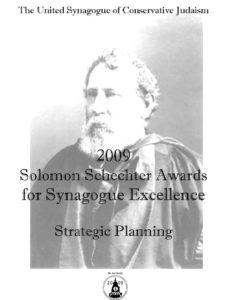 The Jackie Sherman Group is just one part of the equation. We only succeed in partnership with a committed client. Are you ready for success?
Read More…

What Our Clients Say:

There's something different about the way you're able to relate. It feels more genuine than simply that you're doing a job; while always being exceedingly professional.

For 2 1/2 years Jackie provided consulting support to our diversity leadership group and facilitated numerous large and small group interventions thorough our business unit. She is very talented and brings to the table an extensive experience base coupled with a level of insight not found in many consultants. I recommend her highly.

Coaching with Jackie has helped me in taking a softer, more personal approach to working with clients. She has an ability to listen very closely, not just to the verbal, but also the nonverbal. She knows when to dig deeper and notices what I didn’t see about myself before. She has also helped me become more systematic and consistent as a small business owner.

Jackie got me to slow down, which gave me space to think differently. She especially helped me, in my leadership role, work through getting others to collaborate and think through challenges on their own. Jackie creates a good connection, where I can speak freely and feel listened to – it has been valuable for my personal development.

Jackie led us through a strategic planning process that included input from our multi-generational congregation and leadership team, resulting in a dynamic plan that we put immediately into action. The outcome is that we’ve experienced a new level of growth and vibrancy for our congregation. Jackie is highly skilled at working with groups – she was just the right person for this endeavor.

Jackie facilitated a strategic planning process for our organization that received very positive feedback from our board and donors. I was impressed by her ability to work through the high-level conceptual challenges. And as a leader, I truly appreciated her willingness to ask the hard questions and challenge me to think things through, which always improves the end product.

The strategic planning process Jackie facilitated resulted in a plan and structure that has enabled us to better organize our work, broaden our service area, improve fundraising, and engage volunteers – the plan helps us fulfill our mission. Jackie did a great job of managing all of our opinions and passion in an honest, but delicate way.

I’m so pleased that, several years after working with Jackie to complete our strategic plan, we are running the organization using the plan as an actionable template. The plan has become embedded into our culture. Jackie’s approach is smart, practical and very thorough. We trusted her process and got the result we wanted.

Jackie’s coaching has helped me to lead better in what can be an emotionally charged theatre environment. She helps me get to the core issues, deal with the bigger picture, and formulate an action plan. She is very responsive and resourceful and draws from her deep experience in both the for-profit and non-profit worlds, which gives us new perspectives and insights.

Jackie has been a coach and strategic thinking partner for me since 2004. She is a great listener and her broad base of knowledge provides an outside perspective to think through problems in ways I can’t do on my own. Jackie helps me come up with processes, is good at showing me my strengths, and she’s helped me add very useful tools to my toolbox.

You can either win or lose during a transition, so it’s important to pay attention to this critical time. The first transition Jackie coached me through was so successful that I have retained her for every work transition for the last 10 years. She helps me get a clear view of the situation and approach it strategically. Her keen observation skills set her apart from everyone else I’ve worked with.

Jackie helped me 'see' the right questions to ask.

We made dramatic progress in 300 days.  I don’t usually praise consultants in public,   but we couldn’t have done this without Jackie Sherman.

Please accept my sincere thanks for your excellent organisation. It really made it a successful event!  Your dedication and your support to the design team were essential factors in this success.  You managed to keep us on track with the schedule without constraining the group's creativity.  I was positively surprised with the way we were able to engage such a large group and raise all the critical issues.  And it was quite remarkable to see us achieve consensus around a very good list of action items.  A lot of this, was due to your engagement and experience!

Working with Jackie was truly a developmental experience and a real pleasure.  She was able to “get to know me” very quickly, using probing questions and strong listening skills, and then effectively used that knowledge to ask challenging questions throughout the coaching experience, forcing me to look at things differently and explore different options.  She brings a holistic approach to coaching, helping the client discover the connections between different aspects of work and life, and the interdependencies of mental, physical and emotional states.  It is this unique approach, and the resulting new awareness found, which has made a long lasting difference for me.

I have worked with a variety of consultants over the years and have only highest praise for Jackie’s consulting abilities. She worked with a variety of individual and groups during our project. In each of these relationships she met and exceeded our expectations. We would jump at the chance to re-engage Jackie in the future on any organizational change or organizational development project.

You helped us with many important changes. Our organization is a different place now. We have greatly improved our communication and decision-making. The 3 years that we worked together were very rewarding for me and rich with learning. I had very challenging times and I could not have made it through without your support. I believe the library has a better result from our reorganization because of your involvement with us.

Since 1999, I've had the pleasure of working with Jackie in multiple roles and scenarios.  Her expertise in effective organization design, change and leadership is unique both because of her truly global, diverse experience base; and because of her deep theoretical knowledge paired with ongoing practical application.

Jackie meets you where you are, works with you to clarify where you want to go, and helps you get there! She has a gift for creating an environment where you can sense her expertise at work without feeling like the latest 'coaching tool' is being pulled out and used on you. Her commitment to excellence, growth, and success has been instrumental in helping me achieve several professional and personal goals.